On our previous visit to we had explored the area from the Pass itself, which was the British position. This time we wanted to explore the approach to the Pass used by the French. This involved a 60 miles drive to St Jean Pied du Port and then another 6 miles up a steep, narrow and winding minor road to the Redoubt de Chateau Rignon. This was the position held by the forward picquets on 25 July 1813. The photo shows the position from behind the Redoubt looking towards the French approach area. 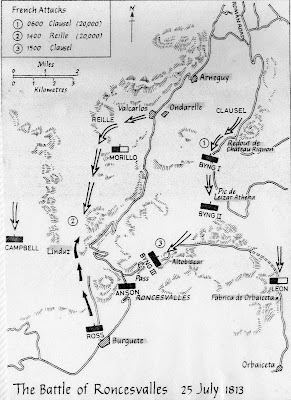 The French approached on both sides of the . The main fighting was all on the right of the map. The area we visited today was between 1 and 3 on the map.

The new road goes off to the right, and this is where we left the car. I am standing on the 1813 road on the Redoubt de Chateau Rignon. 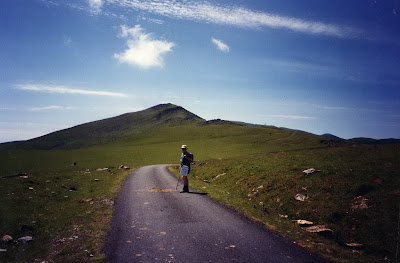 The British picquets retreated from Chateau Rignon to Pic de Leizar Atheha, which was held by seven British and one Spanish light companies. They were now attacked by 17,000 French infantry. I am standing on the road used by the French and the Pic is directly ahead. Because of the steep slopes either side of the road, the light infantry were able to hold this position for most of the morning and allowed the British troops to concentrate on the two miles beyond. 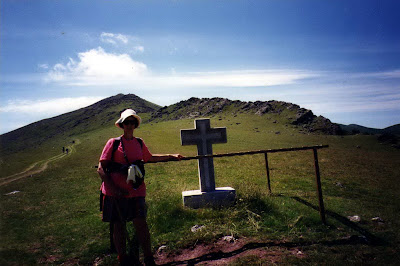 We were surprised to find quite a few walkers in such an isolated area, but when we found this marker we realised we were on the pilgrim route to Santiago de Compostella. 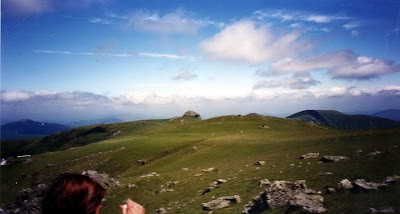 We had lunch in the Pic de Leizar reading descriptions of the fighting here. The light infantry were spread amongst the rocks and held off repeated attacks by enemy skirmishers. Because the sides of the mountain are very steep, the French were unable to deploy their men and make use of their vastly superior numbers. Eventually they formed dense columns and marched right over the position, forcing the light infantry to retire to the main position on the Pass.

Posted by paul leniston at 5:29 AM