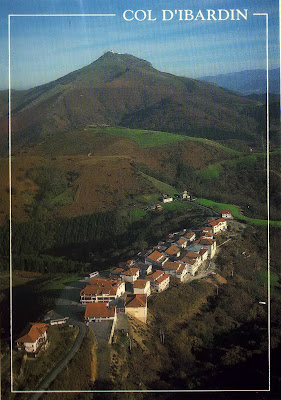 Overcast skies yet again. We had planned to drive to Orthez, but the dismal weather decided us to postpone the 65 mile journey in the hope of better weather. Instead we decided to return to Vera and explore the Bayonet Ridge again.

The ridge is dominated by a collection of duty free shops, with a large car park and plenty of places to eat and drink. There is nothing to show that it played a critical part in the campaign of 1813, and I doubt if many of the thousands who visit each week are aware of its colourful history.

The hill in the background is Le Grande Rhune. 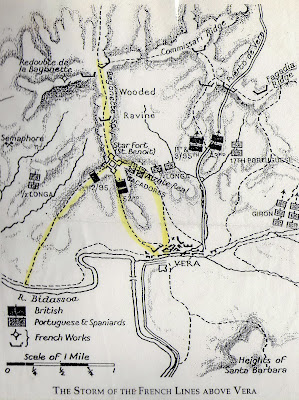 From our earlier visit we had a good knowledge of the area, and we quickly found a path which led away from the shops towards the bayonet redoubt and the area of fighting. It is appropriate that this path is called Commissari Ridge on the map. 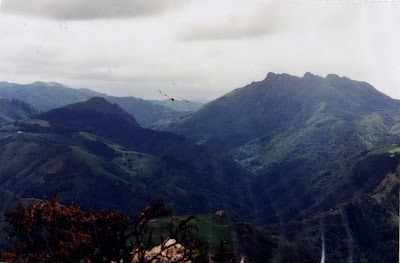 The weather quickly took a turn for the worse, and it was soon raining heavily. Despite our waterproofs we had to seek shelter in a small cave. We immediately noticed a very wet donkey who stood a few feet away and stared at us resentfully. Our cave was obviously his home! He looked so miserable that we felt guilty keeping him in the rain. Despite the weather we left the cave and walked back to the shops. As soon as we left he scooted into the cave.

It was clear that the heavy rain would not soon clear up, so we settled for a hot coffee in the café and returned to Sare. This was not the first, nor would it be the last, battlefield walk which we had to abandon due to the weather.

Posted by paul leniston at 1:17 AM