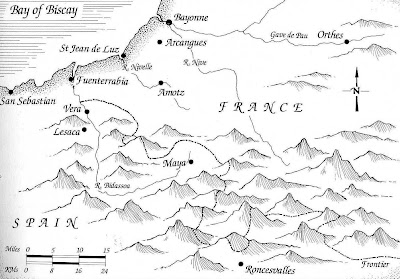 This is the fifth blog covering our exploration of Napoleonic battlefields. The earlier ones were:

and with Holts Battlefield in 1991

Each dealt with walking the battlefields, and each had a separate entry for each battlefield.

This blog will be slightly different. It covers our extended 17 day visit to the during which we covered a much smaller area but in much more detail. For this reason it will be presented as a journal of the holiday, rather than a series of battlefields.

Our 1995 visit to Northern Spain and the Pyrenees gave us a taste of ’s 1813 battlefields, but left us determined to return and spend more time getting mud on our boots.

Both of our previous visits to had involved traveling long distances and spending relatively short periods of time walking each battlefield. This worked well because one day is quite sufficient to explore most battlefields. But the covers a much larger area, and you get little impression of the campaign from just driving around.

We decided we would have a two week holiday based in Sare, a small village on the French side of the . In 1813 it had been the centre of the battle of the Nivelle and was ideal as a base.


I have always found ’s 1813 campaign to be a difficult one to grasp. This is probably because it covered a wide area and involved widely dispersed armies. Our previous visit had made it obvious how difficult it was to find the exact location of battles we had read about. Most histories of the period give a broad overview, but rarely sufficient details to walk the battlefield.

So our first step was research. Our flying visit to the area of the previous year had made us realise that exploring battlefields in the was not easy. Road communications through the area has changed a lot since 1813, and was a major road then might now be a forest track.


We had found very little to indicate where even famous battles had taken place. For example we spent half a day driving around the Rhune trying to find the location of the light division attack from Vera during the battle of the Nive. We drove around for an hour or so and found nothing, eventually stopping at a large duty free shopping area. It was only when we returned to that we realised the shopping area was the site of the battle.

So we, or rather I, would have to spend much more time in preparation than for our previous trips. This would be a labour of love, for the more you prepare the more you enjoy the holiday.


Once again our main source for a general overview would be Jac Weller’s “ in the 1808-1814”. This had been our constant companion during all of the previous walks in and , and would again provide a general description of each battle. 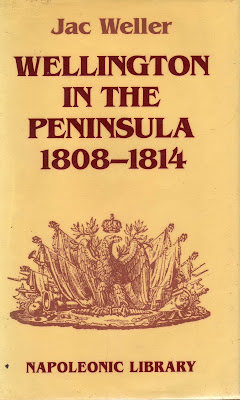 For a really detailed description of the operations, and a very good guide to the area, we used two books by Major General F C Beatson. Both had been recently republished and were easily available.

“With in the Pyrenees” covered the period July to August 1813 and the battles of Maya and . 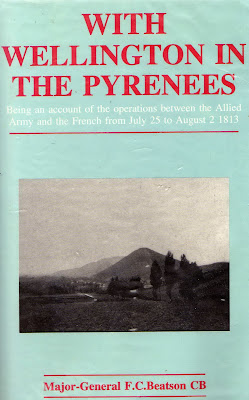 “, the Bidassoa and Nivelle” covered October to November 1813, and in particular the series of battles around Sare. 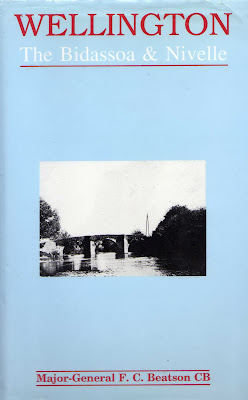 I also photocopied all of the battle maps and diagrams I could find of the campaign.

Finally we researched accommodation in the area. We did not have access to a computer at this time, and the local travel agents were no help at all. We got a book on French Gites, and found this one situated on the outskirts of Sare. 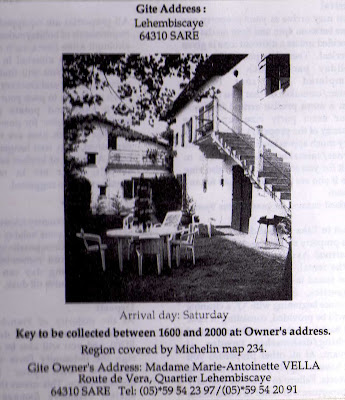 We would need a car, and it was cheaper and more convenient to drive our own than fly and hire. It would be a long journey whether we sailed to Spain or France, but the latter was much cheaper. We booked a ferry from Portsmouth to Caen for 21 June 1996.

Posted by paul leniston at 2:02 AM