Ainhoa and the Pass of Maya 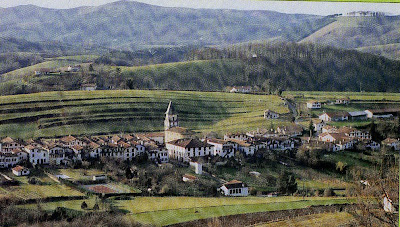 It was a little depressing to wake to yet another overcast morning. The weather had been a disappointment so far, but at least it was not heavy rain as on the previous day.


Today we planned to revisit the . We had already spent some time there the previous year, but felt that it was worth a second, and more detailed visit. Driving from Sare to Maya we would pass Ainhoa, described as “the prettiest village in ” – no doubt many villages have a similar name! Ainhoa played an important part in the in the battle on 25 July 1813 as d’Erlon’s corps formed up there prior to their march on the Pass at Maya. There is little to see now, other than a pretty village. But it served as a good location for a cup of coffee whilst we waited for the weather to clear. 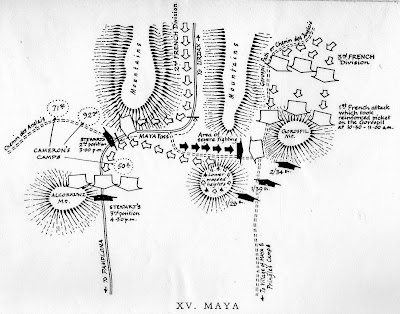 From Ainhoa it was but a short drive up to the . Last time we had approached from the south, this time we were following the French march, though on a modern road. But we did get a good impression of the terrain they had to pass 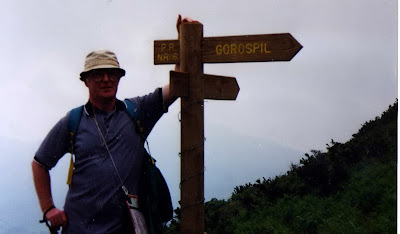 is a small hill which dominates “The English Road”, then the main track from Ainhoa to the . It was held by a company of about 80 men as an advanced observation post, and was the scene of fierce fighting during the early stages of the battle. Last time we had experienced some difficulty in locating it, mainly because we were looking in the wrong place! Better prepared this time, we even found a sign post to it. 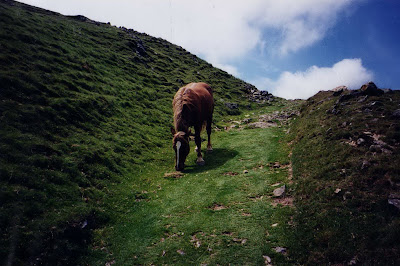 This apparently wild horse is walking on “Chemin des Anglais”, which was the scene of the most famous part of the battle. It is marked on the map above as “area of fierce fighting”. It is a narrow grass path which leads from to the Pass itself. Having taken Gorospil the French had only to advance the short distance to the Pass in order to deploy and destroy the defenders. As they reached this point they were met by half a battalion of the 92nd (Gordon Highlanders). 400 men faced an entire French division and delayed their advance, though at a terrible cost. 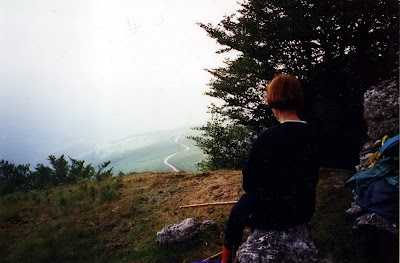 Jan is sitting on and looking down on “Chemin des Anglais”. It is clear from this photograph why possession of this hill was so important to both sides. 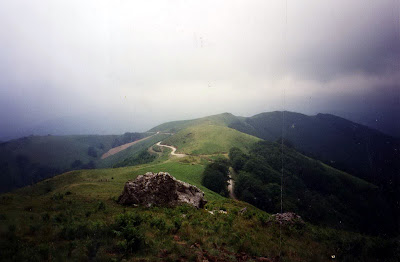 Another view from Mount Gorospil, looking towards the Pass of Maya, which is just out of sight behind the far hill. The hill either side of the path is very steep, and prevented the French from deploying and using their greatly superior numbers.

By now sun had disappeared and the sky was overcast and the dense mists so common in this area closing in. It was time to make our way back to the car and return to Sare for a hot meal. But even poor weather can be an advantage in walking battlefields, as they often have an effect on the battle. It also brought home how difficult it must have been to campaign in such conditions.

Posted by paul leniston at 2:28 AM