Summary of Walking the Pyrenees 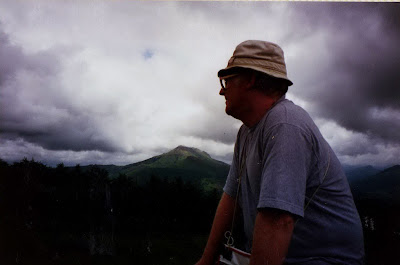 This holiday would be different from our earlier battlefield visits.

First it was longer than our previous battlefields. We left Portsmouth on 21 June 1996, and we would have 17 days to explore a relatively small area of the Pyrenees. We had paid a flying visit to the area the year before, but this time we would spend much more time on each battlefield, and walk the area in much more detail.

Second we would be based in one location for the whole 17 days. We had booked a Gite outside the small village of Sare, right in the middle of the area we wanted to explore. It’s a very popular area, so we could combine our twin hobbies of battlefield walking and hill walking.

We took the shorter boat crossing from Portsmouth to Caen, but we then had the longer drive down through France. However we made good progress and did the journey in 12 hours.

We had hoped for good weather, as it was the middle of June. However the rain started as we left Caen and it rained most days until we returned.

From our Gite we could only see the Rhune, but we could walk there in less than half an hour. Our first attempt was a false start, and we had to return to Sare and try again. But we soon found the right path and the climb was pretty easy.

We would spend three full days walking around the Rhune, and despite the overcast weather it was wonderful. Apart from the summit, which we never did visit, the whole area is completely unspoilt. There is a train which takes holidaymakers up to the summit, so they leave the rest of the mountain alone.

We also returned to Maya, and this time found all the tracks and locations which we had missed the first time. We visited Maya twice, but we never did get good weather.

Then there was Roncesvalles. We were luckier with the weather, and had a lovely clear day following the route taken by the French. On this same day we experienced how quickly the weather can change. We started in clear, sunny weather. Fortunately we were on our way back to the car when the mist came down and the temperature dropped. Visibility was down to about 100 yards, but we were on a good track and found the car ok.

There was also the area immediately around our Gite. Just behind was St Barbe redoubt, and on the other side of Sare a while range of redoubts fought over during the battle.

Sare itself was a delight, as was Ainhoa and the area in between. We walked the path from Sare to Ainhoa, which was connected the two wings of Soults army.

Our only long drive was to Orthez. It was 65 miles each way, but took longer due to the narrow roads. And to be honest the battlefield was a disappointment. I had spent a lot of time studying the battle, and had a really good period map. But much of it was overgrown, the modern roads seemed to go in the wrong direction and we could not even find any paths which would take us to the areas of interest. Orthez is very pretty, but that was not the reason we had gone there.

So all in all not our best battlefield walking holiday. But well worth it despite that. And I ended with a much better understanding of the whole area fought over during the Battle of the Pyrenees, something which I had always found it difficult to grasp.

Posted by paul leniston at 9:38 AM